Design Module No. 2 covers traditional methods for determining the resistance of fillet weld groups in connections of various configurations which are subject to an eccentric point load applied either in-plane or out-of-plane. Weld groups subject to an inclined point load applied in-plane are also included. Several sets of charts and a table are presented to assist designers, and solved examples are given to illustrate practical applications. 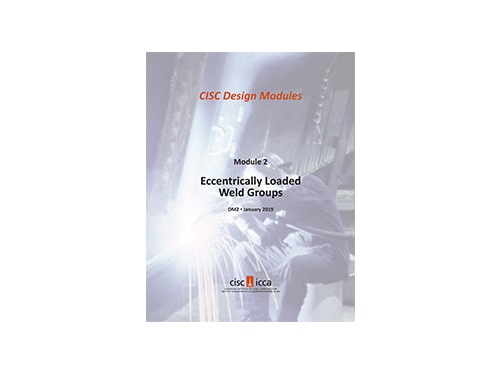 Point loads may be applied eccentrically in the plane of the weld group or out-of-plane. For weld groups loaded in-plane, the load eccentricity is represented by the distance, e, with respect to the group centroid, as shown in Figure 2(a). If the load is applied out-of-plane, as shown on Figure 2(b), the load eccentricity is the perpendicular distance between the plane of the weld group and the line of action of applied force. For this type of connection, only vertical loads are considered.

Resistances for weld groups loaded in-plane have been calculated using the instantaneous centre of rotation method (Lesik and Kennedy, 1990) for matching electrode applications with an ultimate strength, Xu = 490 MPa. 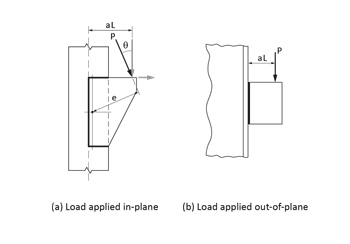 For in-plane loading, charts have been chosen over tables. Because the curves are concave up and tables can only cover a finite set of discrete angles, linear interpolation of C-values for angles other than those tabulated always errs on the unconservative side.

Module 2 is available in print at this LINK