CISC is introducing the first module in a new lineup of upcoming Steel Design Modules. Module 1, “Eccentrically Loaded Bolt Groups”, covers traditional methods for determining the resistance of bolt groups in connections of various configurations and subject to an eccentric point load applied either in-plane or out-of-plane. Bolt groups subject to an inclined point load applied in-plane are also included. Several sets of charts and tables are presented to assist designers, and a number of solved examples are given to illustrate practical applications. 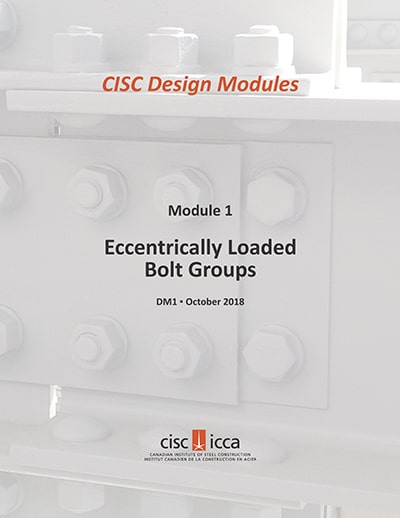 A thorough treatment of the behaviour and design of steel structures in the form of a publication has proven to be an immense task and often entails multiple volumes. Accordingly, individual topics are better covered by modular publications, which also facilitate future revisions as research, practices, codes and standards evolve. The CISC Design Modules aim to address various topics ranging from design and construction of steel structural systems, members and components, to connection details. Most modules will serve as design aids including design tables, charts and examples. In general, these publications are intended to supplement rather than repeat existing textbook material.

The CISC Design Modules will be published alongside the Steel Design Series, which feature downloadable documents that are shorter in scope.

Module 1 is available in print at this LINK.

Module 2 on Eccentrically Loaded Weld Groups will be available early in 2019.