Column base plate connections, typically consisting of a steel member welded to a steel base plate connected to the concrete base via anchor rods and grout, are commonly found in building and non-building structures.

This base connection is one of the most important structural components which acts as a transfer medium for all the forces and moments from the entire building into the foundation. Failure of these base plate connections can result in the collapse of the entire frame as it affects the ductility demand and force distribution in the structure (Grauvilardell et al., 2005). After the 1994 Northridge Earthquake, design of steel connections has been significantly revamped across north America. However, a significant amount of effort has been dedicated to the steel beam-column connections under seismic loading. In comparison, limited experimental and numerical investigations were devoted to study the behavior of column base connections. As a result, the design of a column base connection presents several issues, which is not limited to characterization of force and deformation demands, characterization of deformation capacities of the connection components and failure mechanisms, and development of desirable hierarchies of failure modes (Gomez et al., 2010).

Most of the previous studies and design guidelines are focused on base plate design under axial load and uniaxial bending moment (typically major axis). However, very often these base plates are subjected to bidirectional bending moment from lateral loads such as wind and earthquake. Current design codes and guidelines do not address the design of these exposed base plate connections under axial load and bi-axial bending. Although, the columns are designed and checked under combined axial load and bi-axial bending, when it comes to the base plate connection, only the axial load and major axis bending are considered. Practicing engineers often adopt complex finite element methods, or design them in the two directions separately, which often results in overly conservative design.

This pre-test analytical study is conducted to investigate the performance of column-base connections under axial load and uniaxial bending. The purpose of this analytical study is to select and validate a suitable modeling strategy that can mimic the experimental response of column-base connections with reasonable accuracy. For pre-test analytical study, a 3D finite element model is developed using ABAQUS simulation platform. In order to validate the accuracy of the adopted modeling techniques and material models, the results from FE model is compared with the experimental results from Gomez et al. (2010) (large scale experiment test no. 1). This specimen was tested monotonically without any axial (gravity) load and having 10.6% peak column drift. Fig. 1 shows the comparison of the experimental and numerical results in terms of anchor rod force and column drift. From Fig. 1, it can be concluded that the developed numerical model can very well predict the experimental results with reasonable accuracy. The maximum anchor rod force is found 220.12 kN and 213.24 kN for the experimental and numerical results, respectively having a 3% difference between them. 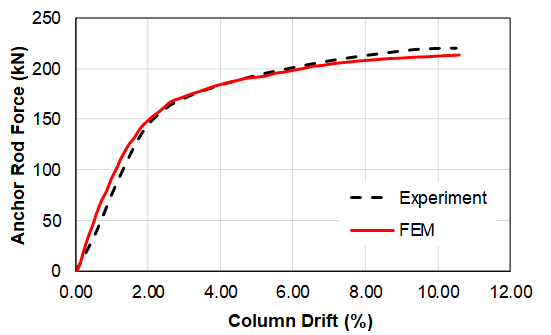 BASE CONNECTION RESPONSE UNDER UNIAXIAL AND BIAXIAL BENDING:

As the first phase of this research, column-base connections are numerically investigated under combined axial load and bi-axial bending. Fig. 2 schematically represents the FE model and the applied loadings. Tie constraints are provided between the column and base plate, anchor rod, nut and washer and grout and concrete since they have monolithic properties. Surface to surface contact interactions are defined between the interface of base plate-grout, base plate and both the top and bottom washer and anchor rod-base plate with finite sliding formulation. Two different interaction properties are defined for these surface to surface interactions. Contact details between the elements are also shown in Fig. 2.

Fig. 3: Column stress (Von mises) along (a) weak axis and (b) strong axis under uniaxial loading

Fig. 4: Column stress (Von mises) along (a) weak axis and (b) strong axis under biaxial loading

Fig. 5: Base plate behavior under (a) uniaxial and (b) biaxial loading

With the financial support of CISC, an extensive experimental program will be conducted on six reduced scale exposed-type steel column base plate connections in Summer 2020 to establish the design methods and interaction equations for column base connections under combined axial load and bi-axial bending. Two steel HSS columns and four steel wide flange columns (W-section) will be welded to the center of the base plate. The column size, as well as width-thickness ratio, will be selected to prevent yielding and local buckling of the column before failure of the base connection. The thickness of the baseplate for the HSS columns will be kept constant while two different base plate thicknesses will be considered for wide flange columns in the experimental study. The proposed test setup is shown in Fig. 6. 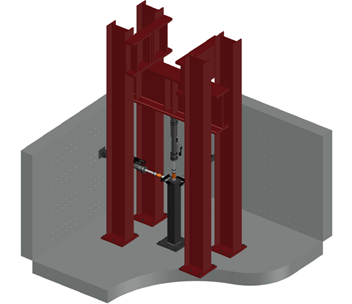 NEXT STEPS: The next step in this ongoing research is to perform experimental investigations on column-base connections under combined axial load and bi-axial bending. This research will be critical to potentially improve base plate and anchor rod design with accuracy and economy under multi-axial loading. All the specimens have been designed and are currently being fabricated. Detailed experimental testing will be done in summer 2020.