Beam load tables for rectangular HSS have been published in the Handbook of Steel Construction up to the 10th Edition, 2010.

Due to lack of space, these design tables were omitted in the 11th Edition, 2016. They are now being re-introduced as part of the CISC Steel Design Series. 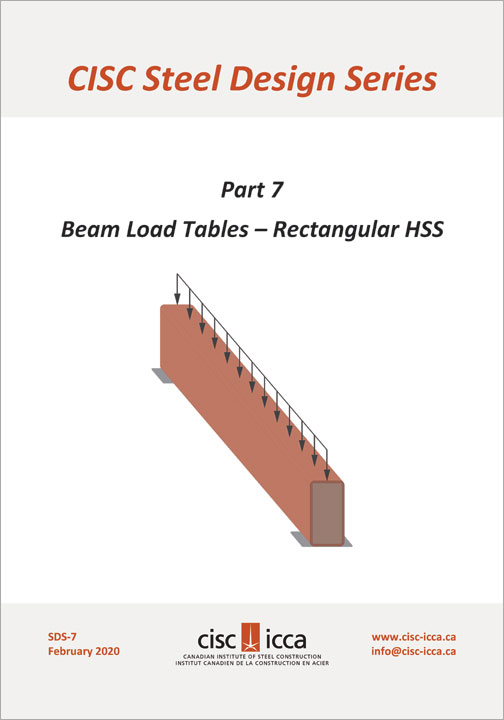 SDS-7 provides tables for selecting flexural members and estimating maximum beam reactions. The Beam Load Tables for rectangular Hollow Structural Sections (HSS) list the total uniformly distributed factored loads (UDL) for beams in strong-axis bending. Two sets of tables are provided: one set based on CSA G40.21-350W steel (Fy = 350 MPa) and another based on ASTM A500 Grade C (Fy = 345 MPa). Two design examples are given to illustrate the use of the tables.

The Beam Load Tables (sometimes referred to as “book loads”) are frequently used to obtain maximum reactions for the design of connections, when beam reactions are not provided on the structural design drawings.

The uniformly distributed loads are based on factored moment resistances calculated in accordance with S16:19 Clause 13.5. To obtain the net supported load (factored), the beam factored dead load should be deducted from the total tabulated load.

For beams with very short spans, the loads may be limited by the shear capacity of the web (Clause 13.4.1.1) rather than by the bending capacity of the section. The tabulated beam loads also take into account the shear reduction factor due to combined shear and moment (Clause 14.6).

Steel Design Series – Part 7 may be freely downloaded at this link.