Humaniti, the Human Experience in the Heart of the City

Located in downtown Montréal, the Humaniti complex is a mixed-use project stretching 120 metres high, with 39 floors of various vocations.

The complex includes 1,600 m² of commercial space, 6,000 m² of office space, a 193-room hotel, and a residential tower with 314 rental units and 150 condominiums. The building’s five-storey underground parking lot will include electric vehicle charging stations, a car-sharing service, and space for approximately 125 bicycles.

Built at the edge of Old Montréal where three distinct neighbourhoods converge, the boldly designed building is shaped like the letter “h.” Inspired by how humans interact with their surroundings, this avant-garde complex sets a precedent as one of the tallest multipurpose towers in Montréal’s International District. Its unique design frames the city’s views, moments, and living spaces.

The building acts as an extension of the beautiful Place Jean-Paul-Riopelle public square, which is surrounded by the Palais des congrès de Montréal, the Caisse de dépôt et placement du Québec (CDPQ)’s head office, and the InterContinental Montreal hotel. The Humaniti complex’s façade will become the fourth wall of this magnificent urban room where La Joute1, a breathtaking fountain sculpture, takes centre stage. 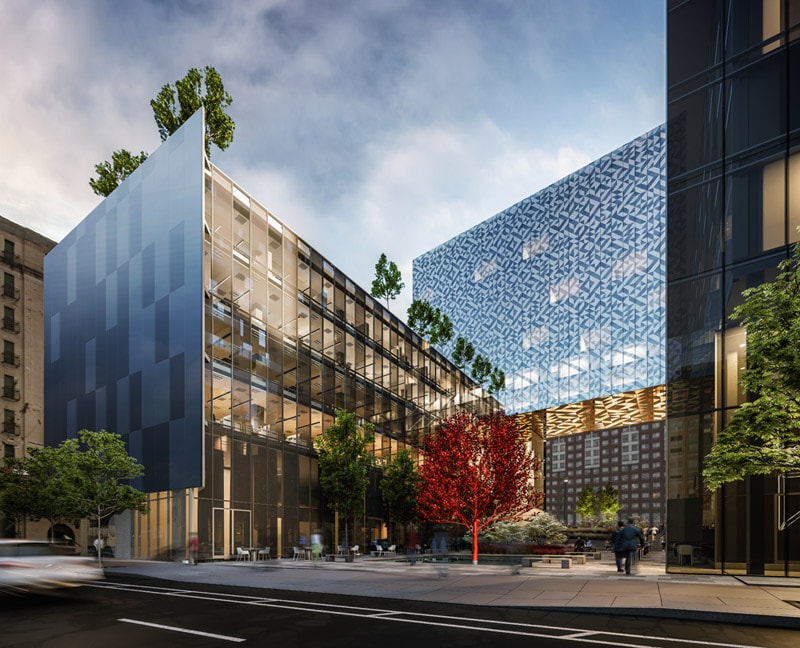 The Humaniti complex was created in response to Cogir Real Estate’s desire to create a sense of community in this extremely dense neighbourhood. Montréal’s first smart vertical community will be a source of pride for urban clients who can work, eat, and enjoy themselves before heading home, all without leaving the comfort of this complex aiming for LEED and WELL certifications, the first such building of this height in Quebec.

Multi-sensory human experiences will abound in an environment that fosters dialogue and openness. The upper floors include two outdoor pools, three outdoor terraces, and a nine-storey concrete structure for the hotel section, built on a three-storey steel structure which bridges the office volume and the residential tower. The gym, spa, pedestrian esplanade, and many common areas are just a few of the complex’s impressive features. 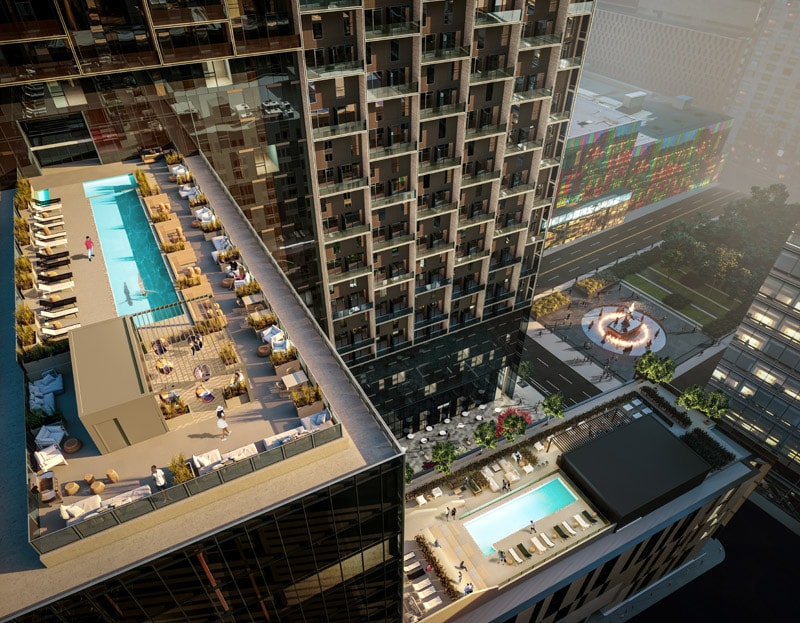 In order to respect the purity of the “h” shape, one of the key architectural features of the project, the structure could not include intermediary columns at mid-span, which would have been required with a concrete-only structure. This was the inspiration for the idea of a hybrid steel/concrete structure. Designing and assembling its connections required immense precision and meticulous attention to detail.

The steel structure had to be erected more than 20 metres above ground between two multi-storey concrete towers within an extraordinarily tight perimeter in the downtown core. The three-storey, 27-metre-long transfer frame, which bears the load of nine storeys of concrete (including one of the two exterior pools on its roof-terrace), had to be erected using tower cranes only, without any scaffolding. Coordinating the cranes, transportation, and lifting plans presented several challenges that had to be overcome to ensure the project’s success.

To establish the foundation for this steel transfer structure, a lateral load-resisting system had to be designed for the seamless structure, which was supported by two separate podiums. The transfer frame was designed as a free-standing structure during construction to avoid the need for temporary supports. This was just one of many innovative solutions that the Humaniti project has inspired.

The arrow, the tallest and most slender part of the complex, is comprised of three distinctive elements: office space, the hotel, and the residential tower. Together, these three elements form three distinct “urban rooms.” At the level of the complex itself, the first room frames the public space and creates a strong dialogue between the site, the public square, and Bleury Street. At the neighbourhood level, the second room is where the hotel and the residential tower intersect. At the metropolitan level, the third room echoes the many skyscrapers and the mountain of Mount Royal that dot Montréal’s distinctive skyline.

The three levels are superimposed while a path through the building is cleared at ground level to assure the complex’s openness and create fluidity between public and private spaces. Designed as a continuation of the adjacent public space, the heart of the complex is devised to be accessible, with a ground floor full of windows to the outside. The building seems to float along Bleury Street as it opens onto the inner square and both forges physical connections and allows for visual access to the urban landscape. The 9 x 110-metre blade of the complex overlooks the street corner, creating a captivating element for the square.

When considered as a whole, the building provides an intriguing image of two narrow blades splitting apart. The truncated shape of the taller blade pays tribute to New York’s Flatiron Building. The second blade touches the ground though appearing detached from the monolithic portion of the building. This effect amplifies the visual experience for pedestrians as they observe the building from Place Jean-Paul-Riopelle. The blades are architectural beacons designed to connect the project on three planes. Separate from the portions it conceals, each blade has a specific tectonic quality that calls upon the architectural language of the three distinct levels of the urban environment.

The hive concept was incorporated to address the idea of a vertical community. The prefabricated balconies break with the scale of the project to create a domestic space. The distinctive hives are not fully visible from the street. Arranged in staggered rows, the hives let natural light into the residential units and produce panoramic views from within them. Seen as a whole, the order and simplicity of the hives draw the eye. 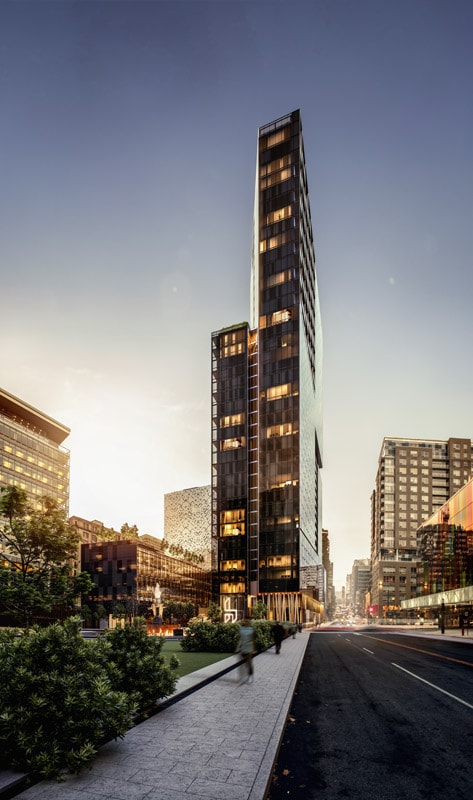 If the Humaniti project had to be described in just one word, that word would be “convergence.” From an urban perspective, the complex is at the convergence of the Quartier des spectacles, the Quartier international, and Old Montréal. Architecturally, the building is the result of the convergence of perfectly combined and interconnected mixed uses. And the building’s engineering relies on the convergence of the structural capabilities of concrete and steel, providing this unprecedented project with the perfect blend of strength and spatial flexibility. Estimated at $200 million, work began in July 2017 and is scheduled for completion in 2020.

*This article was originally published in Advantage Steel no. 66 and can be found here.