The Circuit Gilles-Villeneuve covers most of Montréal’s Notre Dame Island and is an integral part of Parc Jean-Drapeau and its annual activities. The Canadian Formula 1 Grand Prix has been held there every year since 1978. This major event garners international visibility for both Montréal and Parc Jean-Drapeau.

NEW INFRASTRUCTURE AT THE CIRCUIT GILLES-VILLENEUVE

As part of the 2015 to 2029 renewal of the Canadian Grand Prix Agreement, the Société du Parc Jean-Drapeau (SPJD) committed to contributing to the refurbishment and expansion of the Circuit Gilles-Villeneuve infrastructure.

The objective of the project was to upgrade the equipment in the paddocks, which was built in 1988, to the requirements of the Fédération Internationale de l’Automobile (FIA) and the Formula One World Championship (FOWC) while increasing the capacity of the loges above the garages to 5,000 people, compared to 1,800 in the former building. Several structures had exceeded their useful lifespan and required upgrading.

The new construction inevitably required the demolition of the existing tower and garages, as well as the reconstruction of the building that houses, among other things, the team spaces, the control tower and the Paddock Club. In addition to meeting budget requirements, the mandate’s main challenge was absolute adherence to the schedule prioritizing planned events. 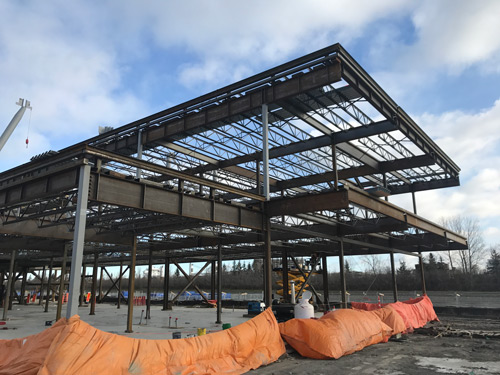 Jonathan Binette, Eng., mentored by Alexandre Poulin, Eng., and Associate Partner (CIMA) acted as structural designer in addition to providing heightened oversight of the Canadian Formula 1 Grand Prix infrastructure refurbishment. Very specific constructability challenges had to be considered in the design, such as absolute adherence to the schedule to limit any impact on event activities, a small, enclosed workspace between the Olympic Basin and the racetrack and structural work primarily undertaken in winter conditions. Binette opted for a steel structure design, which allowed the team to meet both the technical challenges and the project’s very tight deadlines. As compared to other construction materials, this choice afforded the Société du Parc Jean-Drapeau a more cost-effective solution.

The new paddocks at the Circuit Gilles-Villeneuve houses the garages of the various F1 teams, control tower, staff premises, corporate loges, media spaces and podium. The three-storey building, with a surface area of more than 21,500 square metres, comprises a ground-floor structural slab on screw piles, steel framing covered primarily by composite cement slabs on the upper floors and glued-laminated timber roofing. A design using concrete slab on metal deck and girders was favoured in the office area due to smaller spans. The trusses were supplied by CANAM Group Inc.

With a length of more than 300 metres, the building was separated into four structurally independent sections with connections allowing for longitudinal movement. Sliding steel beams allow the expansion joints separating these sections to move.

A building that aims to be multi-purpose, conventional in its choice of materials and modern in its envelope. While blending almost seamlessly into the Parc’s landscape, the refurbishment of the Circuit Gilles-Villeneuve paddocks includes:

The bold design of Architectes FABG presented structural engineers with several significant challenges. Among them are very long spans (more than 12 metres), numerous overhangs at each end of the building, leaning tubular steel columns with conical tops slanted on two floors, precast concrete slabs on tiered beams, giant screen mounts on the roof, solar panel mounts and virtually no margin for error with respect to completely masking the steel connections in the wooden beams.

Composite steel beams were used in the design for their extremely broad span. Adding Nelson studs on the upper cap makes composite action between the steel beams and the concrete slab feasible. This optimizes the structure and minimizes the weight, thus cutting costs.

Designing the connections between the triangulated timber frame and the tubular steel columns was also a puzzle. The engineering and modelling of details required a high degree of optimization and precision. To meet both aesthetic and fire-resistance requirements, the steel joining plates had to withstand significant stress while remaining hidden inside the wood. Differences in the fabrication and installation tolerances of the two materials also had to be taken into account in the design of the connections.

An efficient and rigorous coordination process had to be implemented rapidly during the execution phase to allow the suppliers of wood and steel structures to quickly begin production.

A bright, modern and private space of astonishing magnitude in a unique location only five minutes from downtown Montréal. Facilities specially intended for the Formula 1 racing world, offering visitors from near and far a spectacular show and providing competitors and their teams a flawless experience.

Now occupying three floors, the building’s layout has been completely reimagined to meet everyone’s needs: team staff, media and commentators, but especially crowds eager for thrills in a state-of-the-art space! 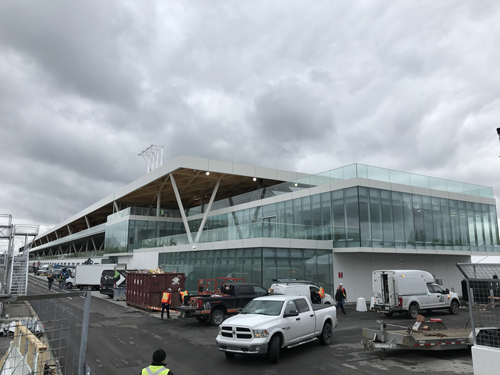 On the first floor are more spacious garages for sports teams, plus a hospitality section in the back completely redesigned for added comfort.

The new paddocks will be able to accommodate technical garages and up to 13 teams, each of which will have two front entrances for single-seaters, drivers and technical teams, as well as a service entrance at the back of the building for equipment or quick access to the hospitality area.

Designed with no fixed dividing wall, the garage space is modular to best meet the team’s needs during each Grand Prix du Canada event.Temporary partitions will be used to break up the space according to the technical needs of this ever-evolving sport.

When designing and drafting the plans, it was essential for the building’s architecture to seamlessly blend into the natural surroundings of the Parc, with an emphasis on local know-how.

The elegant structure and choice of materials of the new paddocks enhance the Parc’s unique environment: its insular nature, proximity to the city, the legacy of Expo 67 and, of course, the mythical Circuit Gilles-Villeneuve.

During the demolition of the old paddocks and construction of the new paddocks, the FNX-INNOV team of soil and material engineers and building specialists was contracted to monitor and control the quality of materials. Throughout the project, specialists provided ongoing lab-based quality-control services for all materials, including cement concrete structures, embankments, steel and timber structures and monitored the building’s waterproofing and roofing work for optimum performance.

“This modern, bright and versatile building, a new iconic addition to the City of Montréal, is a major project that positions FNX-INNOV as an expert and beacon in the field.” FNX-INNOV

Integrated architecture and engineering excellence – Quebec at its best!

The professionals who worked on the project therefore had a rich source of inspiration and judiciously opted for characteristics putting Quebec Engineering front and centre.