The VMC station, which is located at the intersection of Millway Avenue and Highway 7, is the interchange between the Toronto-York Spadina Subway Extension (TYSSE) and the VIVA HWY. 7 BRT (bus rapid transit) transitway.

The canopy (see Figure 1), which is provided to shelter transit users on the VIVA bus platforms, while accommodating bus through-traffic, consists of a rigid structural steel frame comprised of round HSS sections (HSS356x13.0 primary framing members and HSS178x9.5 secondary framing members).  These HSS members support the glass and aluminum panel cladding, and other required design loads (e.g. live, climatic and seismic loads).  They also partially support glass enclosures, below the canopy, which provide an additional degree of shelter to the transit users.  The primary member module is 5 m (see Figure 2), with the secondary members being more closely spaced to support the glazing system.

The canopy design takes an elliptical dome form that blends elements of the vivaNext station shelter program and the adjacent VMC subway station entrance geometry.  The geometric logic is extracted from the top surface of a 250 m radius torus (see Figure 2).

The canopy is approximately 50 m long, 22.4 m wide and 9.1 m high, and is open to the outdoors on its east and west ends.  The composition of opaque and transparent cladding materials balance shading of the main structure with daylighting and transparency within the public realm – supporting CPTED (crime prevention through environmental design) planning principles.

The canopy is clad in aluminum panels to create a facetted appearance.  It is topped with a continuous skylight running the full length of the building, to provide natural light onto the transitway platforms.  The glass is tinted blue to match the colour of the VIVA line stations’ shelter glass.  Clear glass is used to enclose the north and south sides, allowing openness and visibility.

The canopy frame incorporates complex geometry, including dramatic sweeping curves.  This, and the open nature of the canopy, led to complex snow and wind design loads.  Sophisticated, 3-dimensional frame analysis was therefore undertaken.

Structural steel was selected for the canopy frame based on the aesthetic appearance of circular HSS members and associated member-connections, and for its ability to accommodate the complex geometric forms involved. Architecturally Exposed Structural Steel (AESS) was employed. 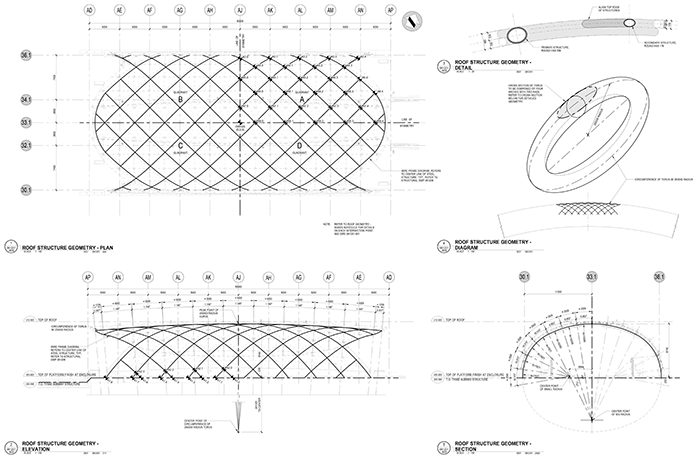 The round HSS sections employed provide uniform strength, stability and stiffness in all directions, which greatly assisted the structural design process.  They also facilitated the connections of the cladding supports and fall-arrest roof anchors at the various orientations of the canopy framing members.

The canopy is supported by a reinforced concrete substructure.  Large steel base plates and large-diameter, high-strength steel anchor bolts transfer canopy loads to the supporting structure.

The canopy, which incorporates approximately 127 tonnes of structural steel, was constructed in modules in the fabrication shop, the modules were then transported to the site for final erection (see Figure 3).  Forming the sweeping curves of the frame members presented particular challenges, as did the many highly-complex, compound connections of the framing members.  Both shop and field connections are welded.  During erection, the canopy was partially supported by a steel, temporary support frame (see Figure 3). 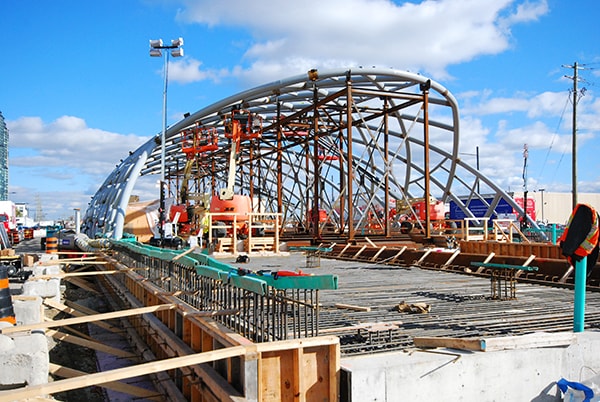 The VMC station is now in use, with the canopy serving its intended function.  The iconic nature of the canopy will be a mainstay of the Vaughan Metropolitan Centre in the years to come.