A Bird’s Eye View from 7,160 feet above Whistler Village

Walk the Cloudraker Skybridge and the Raven’s Eye Cliff Walk and take in the breathtaking views from Whistler Peak. From the Roundhouse Lodge, walk the Peak Express Traverse to the Peak Express Chair; the suspension bridge is located at the Top of the World Summit. The Cloudraker Skybridge spans 420’-0” from Whistler Peak to the West Ridge, crossing high above Whistler Bowl ski run, 7,160ft above Whistler Village.

The Raven’s Eye Cliff Walk consists of a viewing platform with 360° views from Whistler’s Peak to the valley below. The cantilevered walkway will extend 12.5m out from the West Ridge, with exhilarating views well above Whistler Bowl.The Team of Whistler Blackcomb & Vale Resorts, Morrison Hershfield Engineering, Axis Mountain Technical and George Third & Son, signed up for this inspiring endeavour with a steadfast commitment to a successful project.

The main structural head frames for the suspension bridge and the entire viewing platform were erected by special lightweight but mighty KMax Helicopter. The challenges of the lift capacity of the helicopter, mountain top weather concerns, along with safety and crew communication issues, tested our innovative team to the max.

The project timeline started with the desire to have the suspension bridge up before the snow began to fall in October 2017, but the weather changed early that year and we only erected a portion of the work before stopping for the season as the snow and wind took over the mountain top. 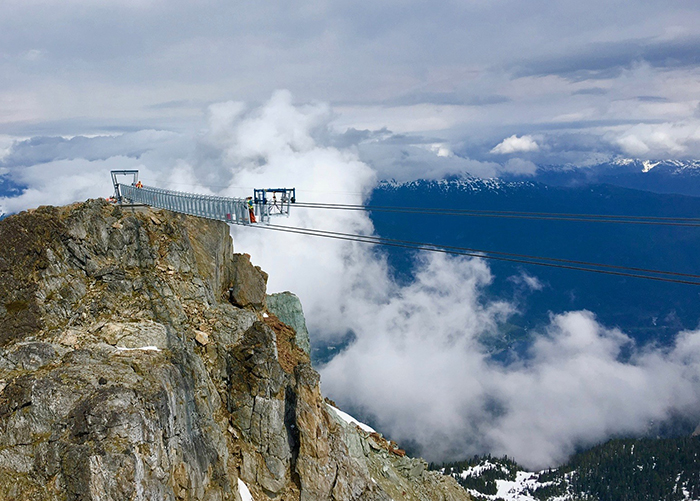 The Whistler/Blackcomb Cloudraker Suspension Bridge and Viewing Platform on the peak of the majestic Whistler Ski resort mountain.

The whistler bridge is a 420’ clear span that rests on four KISWIRE Hylift K16 – 2” round cables. The cables were strung from just west of the top of the peak chair to the West Ridge. Once the bridge is put up and you get to the end of the bridge, there is a cantilever viewing platform that extends 40’ from the cliff face that you can hang out over to look down onto Whistler Village and the valley below, with Blackcomb in the distance.

The steel is all modelled and fabricated in George Third & Son’s steel shop. The 1703 bridge parts were fabricated, sent for galvanizing, and brought back for test fitting and final inspection, before shipping to the site. Most pieces were trucked to the top of the mountain, with some of the larger pieces brought up and installed by helicopter. The smaller pieces were assembled at the top of the mountain and put onto the cables one basket assembly at a time, and slid across the cables until forming the suspension bridge that spanned the full 420’.

Assembling the bridge baskets on the mountain top started June 10, 2018, with Mother Nature once again bringing snow to the top of Whistler. It looks like winter in the pictures, but it was the start of summer.
When it came time for the viewing platform installation, the main challenge was to bring in and install all the parts using a specialized Kaman K-MAX helicopter. It is a helicopter with intermeshing rotors, optimized for external cargo load operations, and is able to lift a payload of over 6,000 pounds, which is more than the helicopter’s empty weight. We only had a short window to use it. The 40’ long beams, which weighed 5,000 lbs each, forced the pilot to restrict his fuel load to allow for that much lifting power, so he had to re-fuel multiple times to make sure the payload wasn’t too heavy. Things went very smoothly and the cantilever install started at 9 a.m. and was finished by 3 p.m.

We don’t usually trial assemble our parts in the shop because we are confident everything fits, all our details are done with 3D Models, steel is cut with Robotic CNC machines, and the craftsmanship at George Third & Son put things together correctly. But we wanted to be doubly sure, so we actually assembled the viewing platform completely at our plant. Making sure the end of the cantilevered piece fit exactly was imperative to reduce the risks for the install team of Axis Mountain Technical, standing out at the end of the bridge receiving the 5,000lb. end frame on the end of a strap carried by a helicopter.
There were some challenges, and the first attempt to attach this final part was not successful and we needed to adjust some of the steel’s positioning on the anchor bolts to make it fit. So we needed to put the piece down once to do some tweaking in and out, then come back with the chopper, and made it on the second try.

The challenges of working with everyone cantilevered out over the edge, tied off so they don’t fall to their peril, while working beneath a live helicopter, demands everyone know what to do in advance of the steel arriving. It is almost impossible to hear each other, so unique hand signals were needed. It is quite dangerous work; if the helicopter pilot is in danger, and ever lets go of the load, which he has the ability to do, it can be catastrophic.

The toughness and durability of the galvanizing enabled us to manhandle the steel in this remote location unlike any other protective coating. 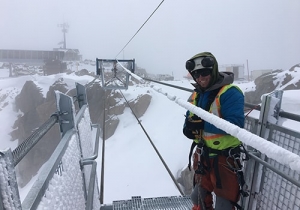 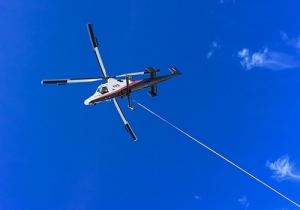 The suspension bridge was installed in the summer, and still we dealt with snow and howling winds in mid-June. After erecting the head frame supports and tying the cables to the rock faces, the suspension bridge baskets were erected from one end and rolled across to the other end by a custom-built trolley system.

The finished product is a superb tourist experience thousands of feet above the resort that will last eternally, made of galvanized steel. Galvanizing was the obvious choice for this project given the life cycle, durability, and economics of Hot Dip Galvanizing.

The Third family has two residences in Whistler and have been skiing the mountain for over 40 years, and we are very proud to be involved in this project that has changed the landscape forever for all to enjoy.