Structural Steel Was Essential to Bring Design to Life

It’s a new day for the University of Toronto Schools (UTS). At 110 years young, the university preparatory school is undergoing a significant renewal that will bring numerous upgrades and additions to the Bloor Street building.

The original three-storey UTS building was founded in affiliation with the University of Toronto in 1910. Designed by Darling and Pearson Architects, the school underwent several expansions throughout the years, including the addition of new wings that have since been designated as heritage architecture.

This latest renewal will see UTS’s heritage building and its wings dramatically restored and new additions made throughout the campus. It is being led by Eastern Construction alongside Diamond Schmitt architects, RJC Engineers and M&G Steel, an Oakville-based fabricator and CISC member.

“We were honoured to be a part of this team and contribute our knowledge to this very unique and interesting project throughout the structural steel construction,” says Brian Thompson, P. Eng. Vice-President of External Operations with M&G Steel.

Together, the UTS renewal team has carried out a multi-phased development with the intent to modernize the facility and introduce new amenities and learning spaces for its students. Highlights of the initiative include expanding the building’s size to 120,000 sq. ft. and installing a new black box theatre, auditorium, athletic centre, library, science labs, art spaces, double gym and a skylit indoor atrium, among other student spaces. Additionally, crews have been tasked with revitalizing the heritage-protected facade, re-envisioning the school’s Huron Street entrance and conducting other restorations throughout. 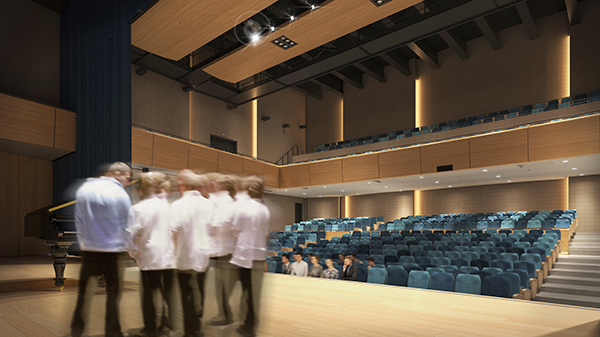 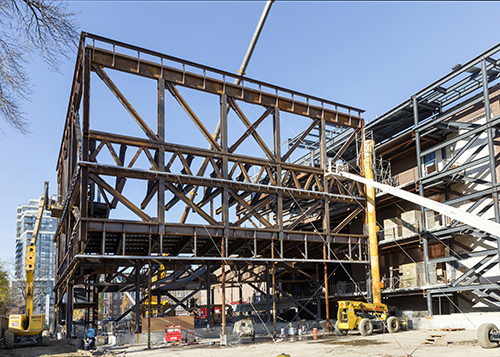 Steel has been used extensively throughout UTS’ transformation. According to John Della Serra, Project Superintendent with Eastern Construction, the material has proven essential for realizing the ambitious designs within the project’s timelines: “Steel allowed for the building framing to go up faster than, say, reinforced concrete as it is prepared in the shop. And since it is structural steel, no shoring of the structural flooring was required, meaning mechanical rough-ins and stud framing could start sooner.”
The use of steel has also enabled Diamond Schmitt’s vision to take shape. For example, steel was essential in creating the eight-metre-high gymnasium and spacious athletic center. It also played a central role in creating a new skylit atrium that serves as a central gathering place for UTS students.

“The use of structural steel for the UTS addition was essential for realizing the design concept, and the atrium is a good example,” says Diana Saragosa, Associate with Diamond Schmitt. “The skylit atrium was designed as a forum and a crossroad for the school community. It’s at the center of the plan and links the heritage wing and the addition with a corridor loop on each floor and vertically connects all six levels of the school with cantilevered steel stairs and amphitheater stepped seating.”

Perhaps one of the most challenging aspects of UTS’ renewal is the addition of a state-of-the-art, 700-seat auditorium.

“This was probably the most complicated portion of the project, and included a lot of truss work, curved balcony trusses and AESS steel elements,” recalls Thompson. 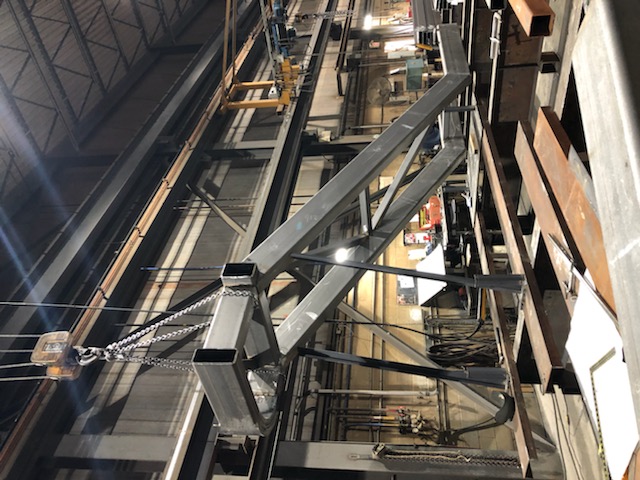 Roof beams for the auditorium span 85 feet long and required a special permit to deliver. Yet while the erection phase was complicated, Thompson says it was executed with a precise sequence scheme that necessitated temporary shoring. Reflecting on the entirety of the project, he notes, “One of the unique aspects of this project was that the loads used were the actual design loads from the outset and the specifications did not just call for maximum loading. This streamlined the fabrication and facilitated actual sizing to accommodate the geometry which was never at 90 degrees.”
“M&G’s goal was to optimize their steel fabrication and they succeeded; the expertise and timely response of their in-house detailing team were the largest facilitators in achieving this goal,” Thompson adds.

Certainly, says Matt Deegan, Associate with RJC Engineers, using steel allowed the team to achieve the complex geometry detailed in Diamond Schmitt’s designs while minimizing the weight of the structure. Moreover, he adds, the material added a degree of flexibility to the build, noting, “It is often easier to accommodate design changes during a project when steel is used, both during the design process before construction and for remedial measures after the steel framing has been erected.”

As for working with a local and trusted fabricator for the renewal, Deegan shares the opinion of other project partners in noting that, “Knowing that the fabricator is a certified CISC member instills a level of confidence in the quality assurance, conformity of the materials used and the fabrication.”

Students won’t be waiting long to clock in at the new UTS. As of August 2021, general contractor Eastern Construction reports that work is in the final stages, with the interior ceiling being completed and classroom flooring being installed. Outside, crews are in the process of installing the brick veneer and started the preparations for the next steps in bringing this project to fruition!

Originally published in Advantage Steel No. 69