The occurrence of brittle fractures in steel highway bridges is relatively rare, thanks to prescriptive requirements for steel toughness that have been around in one form or another since the 70s and the more recent provisions added to the North American bridge design codes requiring that fracture critical members be identified and treated with particular attention in the design of new bridges. Brittle fracture remains a significant concern for steel bridge designers never-the-less, due to: 1) the significant consequences of failure associated with brittle fracture, 2) uncertainties surrounding the effects of new alloy choices and fabrication steps (e.g. welding, galvanizing) on brittle fracture risk, and 3) uncertainties surrounding the effects of in-service damage or gradual deterioration on brittle fracture risk.
Several identified, recent cases of brittle fracture occurring in bridges in North America were not the result of material quality issues or deterioration, but rather of a phenomenon known as “constraint induced fracture” (CIF). This type of fracture tends to occur in connection details involving three welded plates intersecting at a point, leading to an increased brittle fracture risk, because of the resulting local stress concentration and highly constrained triaxial stress state. Brittle fracture is also a concern in cases where fatigue cracks have been identified in existing structures, largely because there is little in the way of guidance provided in the North American bridge design codes on what can be done in terms of assessing brittle fracture risk in this situation. Other situations that can result in an uncertain or elevated risk of brittle fracture include: fabrication steps such as flame cutting, welding, and galvanizing, and embrittlement due to impact damage and heat straightening repairs.
This research project has the following specific objectives: 1) to assess and quantify the reliability level against brittle fracture implied by the current toughness provisions for structural steel in the Canadian bridge code (CSA S6); 2) to assess the impact of in-service deterioration and management actions such as regular inspection using various non-destructive methods on this reliability level, and 3) to develop a practical tool for assessing brittle fracture risk in bridges, based on the results of the more sophisticated reliability analyses performed to address Objectives 1) and 2).
The project will include the following major tasks: 1) literature review and data gathering; 2) basic reliability analysis of current brittle fracture provisions; 3) consideration of deterioration effects, and 4) development of assessment tool.
The developed models will be run for a range of cases, with the goal of producing a design aid and/or procedure for rapid assessment of existing structures. As well as providing a useful means for assessing structures, it is hoped that this tool will also help the bridge engineer to better understand what they are effectively doing when they specify a certain level of fracture toughness in the design of a new steel bridge.

A laboratory research program carried out at the University of Waterloo featured the testing of three large-scale steel-concrete composite beam specimens with embedded bolt shear connectors. A detailed assessment of the connector performance was made, facilitating a comparison with similar beams with welded stud connectors previously tested in the same laboratory. It is proposed that the embedded bolt detail may be viewed as a viable alternative to welded studs, given the observed favorable fatigue performance and ease of deconstruction.

This paper examines the reliability of welded stud shear connectors for steel-concrete composite bridge girders. A finite element model of a simply-supported bridge was created featuring link connector elements representing the shear studs. The study considered the probabilistic characteristics of the welded studs and truck loading. The example bridge was designed according to the CSA S6 code provisions. Based on the presented reliability analysis, an increase in the 24 MPa endurance limit of at least 1.45 times is found to be acceptable. 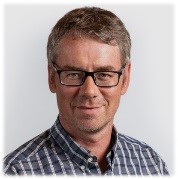 Dr. Walbridge is an Associate Professor in Civil Engineering at the University of Waterloo. He came to the University of Waterloo in 2006, after completing his doctoral thesis at the Ecole Polytechnique Fédérale de Lausanne (EPFL) in Switzerland. Dr. Walbridge’s current research focuses on a variety of areas related to the general theme of “the evaluation and maintenance of existing steel bridges”. He is currently overseeing research projects on the use of peening treatments and advanced composite materials for improving the fatigue performance of existing steel bridges. He also has projects underway on: the evaluation and corrosion protection of weathering steel highway bridges, and shear connections for movable steel-concrete composite bridges. Dr. Walbridge serves on a number of design code committees including the Canadian Highway Bridge Design Code (CSA S6) and Welded Steel Construction Code (W59) technical committees. He is also serving as the Director of Waterloo’s new Architectural Engineering undergraduate program.