Communities in Toronto will have a convenient connection to the waterfront, Trinity Bellwoods Park and the Fort York Grounds upon completion of the Garrison Crossing Project- a construction initiative including 2 new bridges, increased park space and new trails that will enhance accessibility and connectivity for the growing communities in Toronto.

The final steps of the project are underway as crews complete multi-use trails and install lighting and signage. Notable milestones took place in 2018, when two new all stainless steel pedestrian and cycle bridges were erected by the E.S. Fox Limited Structural Steel and Bridge Division.

In July 2018, E.S. Fox Limited erected the first of two Pedelta designed bridges. The North span measured over 176 feet long. It was lifted at a weight of 318,500 lbs. in one piece by one of the largest crawler cranes in North America, supplied by Sterling Crane Canada. The crane was built onsite, with the 32 truckloads of components arriving at the construction site at Ordnance Street off Strachan Avenue in a “just in time” manner, to minimize interference with the numerous construction projects taking place in the direct vicinity. After discussions with the Greater Toronto Rail Operators and the build team CreateTO, It was decided that a crawler of this size and capacity would work best as it required the least amount of rail traffic disruption and no track protection. The crane weighs 725 Metric Tonnes, has a footprint of roughly 30 metres by 13 metres and can lift 894 Metric Tonnes. The machine performed a lift radius of 165 feet and exerted a weight of 4 million lbs. onto the crane pad.  The terminology “super-lift” is correctly used on this project.

In October 2018 the South span was erected. The second of the two bridges was more complicated to install, as it features an inverted arch beneath the deck, forming a support foot. The same crane and similar methods were used to install the bridge over the south rail corridor under shut down conditions similar to the North span.

Pictured below, Image A shows the North bridge span being prepared for lifting. The surface of the structure was “white glass-bead” blasted onsite, giving the finish a uniform anodized look.

Image B shows the crawler crane hooked onto the bridge, ready for the super-lift. The bridge was fitted with a 4-way bridal rigging set up, with legs up to 145 feet long, and an auxiliary stabilizing sling on the arch, using a 20ton chain-fall. For protection of the finish on the bridge, the rigging used were light-weight Kevlar/Nylon slings, complete with custom made triangular stainless steel arch softeners. The bridge arch alone at 48tons is an architecturally inspired true triangular shape with sharp corners. 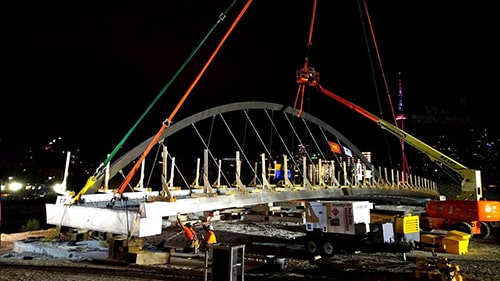 Image C shows the super-lift over the rail corridor, just 1.4 miles from Union Station. A lengthy traffic diversion plan was developed and enforced by Metrolinx during the rail corridor shutdown. 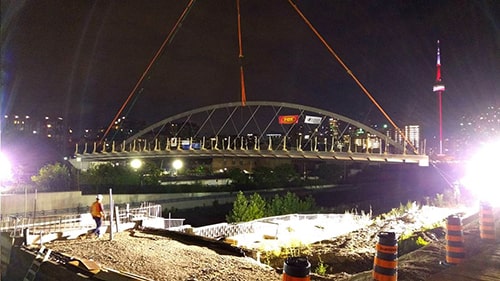 In precise adherence with the engineered super-lift plan, Image D depicts the bridge structure being landed onto the permanent bearings, just after 2:13AM. The rail operators had issued a full shut-down of all rail traffic, including the Go-Train, freight traffic, and all Union-Pearson traffic. Due to the asymmetrical loading, a temporary anti-tip restraint system was installed prior to cutting the crane loose and welding out the bearing plates. Crews worked simultaneously on both abutments. During the shutdown, the precast panels were also installed. Rebar placement started immediately after the precast panels were set, to optimize the shut down time granted, and adhere to the tight schedule. 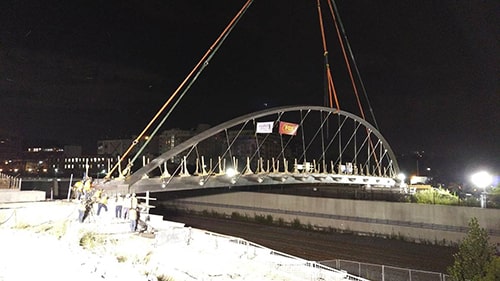