The new CSA S16:19 Design of steel structures introduces “Guidance for specifying third party inspection of steel structures” as an informative annex. The challenge of writing such a document is one that was well-stated in the Foreword of the 1946 American Welding Society D1.0 Standard Code for Arc and Gas Welding in Building Construction, as follows

“The importance of adequate inspection of welded work must never be overlooked. Yet, in drafting a code equally applicable to large structures supporting substantial loads and minor installations or alterations, explicit, elaborate provisions which might appear desirable in the first case become a useless burden upon the latter.

Unless a logical criterion can be devised – and none has been – to mark the dividing line between important and unimportant work, so that separate regulations governing inspection of the two can be formulated, it must rest with the sound judgment and common sense of the administrative authority whether any distinction is to be made.“

The Technical Committee on Steel Structures for Buildings is to be commended for bringing this topic forward and attempting to address inspection of fabricated and erected structural steel (materials, welding, bolting, workmanship and details) and nondestructive examination (NDE) of welds for the structural steel industry, in a manner that provides for public safety without becoming a “useless burden.”

There are several points that must be understood. The Annex is informative, not normative, and provides the engineer recommendations for consideration, the engineer being ultimately responsible for including any third-party inspection requirements into the project specification. The Annex is written using normative “shall” language in clause P2, to ease the specification-writing process for the engineers who choose to require third-party inspections and NDE. However, there are also numerous “should” statements throughout the remaining sections that require careful consideration by the engineer, with a few “shall” requirements included.

Clause P.2.1 also mentions that the project specification should identify who pays for initial testing, presumed to include inspection, and who pays for follow-up or additional testing to rectify deficiencies. To address this item, the engineer should reference the CISC Code of Standard Practice for Structural Steel, clause 6.7 “Inspection of Steelwork,“ that states “The cost of this inspection and testing is the responsibility of the Client. Deficiencies in the Work of the Fabricator and/or Erector requiring re-inspection or re-testing shall have costs borne by the Fabricator and/or Erector.“

The engineer selects of the Inspection Class or Classes (IC1 through IC4), as addressed in clause P3. This should not be confused with Importance Categories as used in building codes. The engineer is to select the Inspection Class for the structure, and perhaps for specific elements of the structure, based on “the required reliability, the type of structure, and the type of loading for which the structure is designed.“ Table P.1 “Inspection classes” provides guidance to the engineer, but leaves questions as to areas of high-rise buildings (over 15 storeys), grandstands, arenas, stadia and other high-occupancy assembly buildings that are not deemed “critical.” For more detailed guidance, the engineer may want to look to other globally-used standards such as EN 1993-1-1:2005/A1:2014, Annex C, which replaced the system described in EN 1090-2:2008. Another resource addressing only risk for various building types is the International Building Code (2018), Table 1604.5 “Risk Category of Buildings and Other Structures.“

Table P.2 “Frequency of third-party inspections” provides recommended rates of inspections for numerous aspects of steel fabrication performed in the shop, in terms of percentage of welds, bolted connections, headed stud anchors, and general conformance in terms of workmanship. It also addresses field inspections of the same items, and adds inspection of steel decks, braced frames, seismic braces and seismic frames. The rate of inspection varies according to Inspection Class, ranging from “Optional” to 100%. Some items, such as reviewing mill certificates, company welding certification, weld procedures and welder qualifications are simply designated “Optional” or “Yes.” 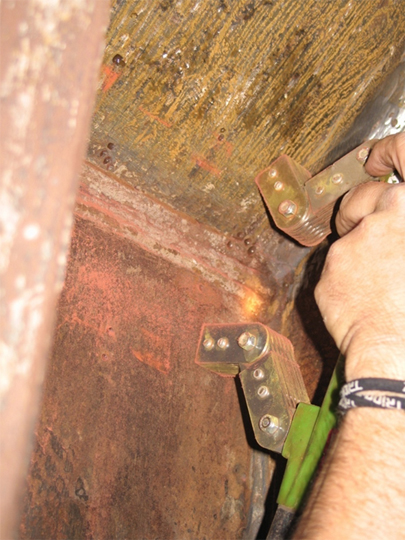 Three elements of Table P.2 warrant a more detailed consideration by the engineer:

(2) For bolted connections, Table P.2 also recommends witnessing installation for a percentage of pretensioned and slip-critical connections, whether pretensioned (tightened) in the shop or field. A “witness” activity is not called for in clause 23.8 for bolting inspection procedures. Also, there is no requirement for witnessing of production welding in CSA W59, only specific items such as qualification tests. Although bolting does not require bolting supervisors and qualified bolting installers, as does welding, such programs should be considered by the industry to increase confidence in the quality of bolt installations, and changing the recommended witnessing to periodic routine observation of installation techniques and use of visual inspection upon completion.

(3) Note 5 of Table P.2 suggests increasing rates of inspection when the steel is “fabricated in regions where the degree of compliance with Canadian requirements is less established.” This may be difficult to write into a project specification if the engineer does not have control of the source of fabrication, but a separate table of inspections tasks and rates of inspection should be considered by the engineer if the fabrication is to be performed offshore.

Table P.3 “Extent of NDE of welds” addresses specific weld types (fillet, full penetration [CJP] groove or partial penetration [PJP] groove) and joint types (butt, T, or cruciform), with consideration for whether the welded joint is part of the seismic system, whether the weld is longitudinally or transversely loaded, or if the joint is in compression. The tables apply equally to shop and field welds. A percentage of groove welds are recommended to receive either Ultrasonic Testing (UT) or Radiographic Testing (RT), and to receive either Penetrant Testing (PT) or Magnetic Particle Testing (MT). A percentage of fillet welds are recommended to receive either PT or MT.

Clause P.5.4 provides a project failure rate above which the rates of NDE should be increased. The project specification should state whether this failure rate is determined by using the number of welds that fail the NDE, or using the length of the welds that fail the NDE. Also, this clause makes it clear that the contractor responsible for the welding is also responsible for any increased rates of NDE. This particular clause is within the NDE provisions, yet also uses the term ” inspection” in addition to “testing.” The engineer should also consider implementation of this clause to the visual inspection tasks described in Table P.2 “Frequency of third-party inspections.”

Any new provision, such as Annex P, that is added to a standard is subject to a variety of interpretations by the parties involved. The engineer should work with all parties involved in the work to ensure that there is a common understanding, and should use the project specification for this purpose. As stated, the Annex is informative, not normative, and as such, the engineer should not invoke it without clarification using clear and concise language.

A CISC Commentary to this Annex should be expected to clarify the recommendations and further assist the engineer in writing the project specifications, as well as helping those who manage or perform the inspections and NDE tasks described.