When the City of Calgary was looking for expertise on pre-engineered buildings for its new compost facility, the project’s general contractor (GC) included Behlen Industries, a manufacturer of steel building systems, on the tendering list.

Behlen’s buildings are expandable, energy efficient and straightforward to construct—and they also retain architectural flexibility. Everything, in fact, the city facility was looking for.

The company was first approached by the joint venture consortium of Nason Contracting Group (a subsidiary of Bird Construction) and Maple Reinders in June 2015. The two companies together became the general contractor for the composting facility and Behlen and the GC solidified the plans over the next several months. Steel was first shipped to the site from the Behlen plant in Brandon, Manitoba in late 2015, and the building was virtually completed by August, 2017. As it now stands, the Calgary Composting Facility remains the largest of its kind in Canada.

Behlen’s Vice-President of Engineering and Innovation, Pat Versavel, says, “I’m sure Behlen was originally included in the tendering process because of our previous involvement in the City of Hamilton’s compost facility. These kinds of plants don’t typically use pre-engineered steel buildings, but we were involved in a successful project in Hamilton, and that was obviously to our 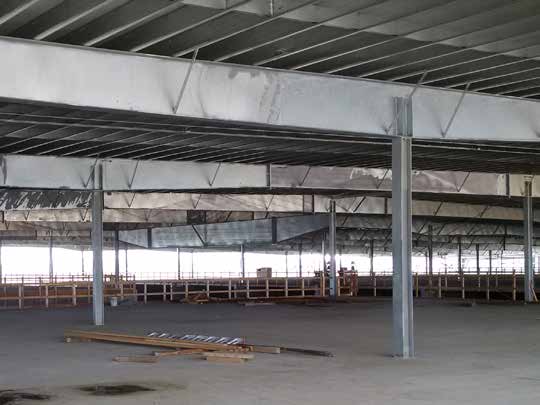 Behlen manufactures two distinct building systems—rigid frame and frameless—and the two have their separate advantages. Which system is going to be the most suitable and cost-effective for the client depends on a host of criteria, such as size, purpose, function and the site itself. Rigid frame systems excel in energy efficiency, condensation control and noise reduction, and the construction process is engineered to create virtually no waste, keeping the building both cost-effective and environmentally sustainable. The technique was used for the Calgary project.

The Calgary Compost Facility produces high quality compost from both food and yard waste collected from the city’s green cart program and dewatered solids, a nutrient-rich by-product from wastewater treatment. There are three principal buildings that make up the composting facility: the main building, curing building and storage building. Taken together, the entire compound is 521,000 square feet and processes upwards of 145,500 metric tons of residential food and yard waste and dewatered biosolids every year. Behlen’s component for the compound was the curing building, which is where the composted material enters and remains for 21 days. Pipes in the floor draw air in and through the material to further enhance break down. After curing, the material is moved to the storage facility. Through a series of defined stages, compost is ultimately sold back into the market in bulk, with proceeds helping to reduce the processing cost and lower the Green Cart program fee.

Versavel says, “At the beginning of this project, the GC only had some rough outlines in terms of what they wanted to do. So, we came up with some preliminary drawings and presented a design solution. In the beginning, we were only given the basics, such as that the roof would need a slope, but there weren’t any specifics as to pitch and degree. So, we gave the GC a concept they could work with, and there was a lot of back and forth throughout before any steel was manufactured. But that’s not typically how we work. Behlen usually receives specific instructions from a GC on what’s required for a project, and that’s what we provide.” 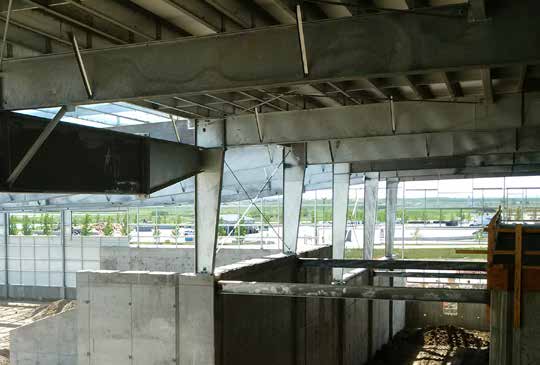 In spite of the atypical start on the Calgary project, the final steel structure ultimately worked. Versavel adds, “Our company designs and fabricates steel shells but we always work from the foundation up. We provide the materials and ship them in parts to the site. We don’t do any electrical or mechanical or actually put up the building. So yes, the compost plant was challenging and occasionally frustrating to work on but ultimately satisfying when it all came together.”

Uncertainties in the building were less concrete. Versavel says, “The structural framing on this project was very long and not very tall, which are both unusual conditions. And because of the building’s overall size and width, you have a higher number of structural members. That becomes a fabrication challenge, because your tolerances have to be more precise, obviously. As you add up all the pieces to form the assembly, you can’t be out with your measurements as you progress down the line.”

The effect of creep was also a challenge. The curing building was large in square footage but short in height. So, if tolerances weren’t as precise as they need to be, a millimetre at the front would show up as a metre at the back end. A taller structure, for example, allows for more wiggle room, and that meant the team at Behlen’s fabrication plant had to maintain tighter tolerances.

Versavel says, “Remember, we’re not exactly building a Swiss watch with our structures — they are steel buildings. But with the compost facility, everything had to be seal-welded and the steel was hot-dip galvanized. Those were all extra layers of complexity. What was also different about this job was to introduce a concept as a solution. That’s not typical for us. The GC may have had other solutions, but they liked ours and made some changes to it as we progressed, but they didn’t have much developed on their side. So, the two things were going on in tandem.”

In April, 2019, Behlen Industries received the award in the Pre-Fabrication category at the CISC Manitoba/NW Ontario Steel Design Awards Gala in Winnipeg. Versavel concludes, “Looking back at the project, I know everyone on the team feels the same way. It was a challenging and unusual project for us, but we’re all glad we did it. This kind of a build only broadens your horizons as a company, and you learn from it. Ultimately it was very satisfying, and the award was just the icing on the cake.”