The Saint-Jacques street overpass is a 120 m. 2-span cable-stayed bridge, designed using a combination of box girders paired with an orthotropic steel deck. This bridge was a part of the massive Turcot Interchange Reconstruction Project in Montreal, Quebec involving the replacement of deteriorated structures and crosses the Decarie Expressway (Autoroute 15). The Turcot Interchange was first opened to traffic in April 1967. On average, over 300,000 vehicles use it daily. In order to minimize lane closures of the highway, the bridge deck was installed by launch in 2 phases during 2018. 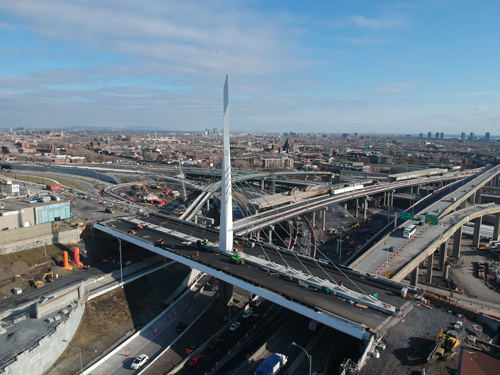 Over 2,100 tons of steel components were fabricated by Canam at their Quebec City Plant. The unique shape of the bridge’s structure, on either side of the central girders, resembles the “Wings of an Airplane”.

As seen from the outside, the Saint-Jacques bridge deck gives the public the impression of a single homogeneous caisson with no visible joint. To achieve this, the design team conceived different prefabricated sections that were transported by land to the construction site. These sections were then assembled on the approaches to the bridge and the outer shell was fully welded on site. 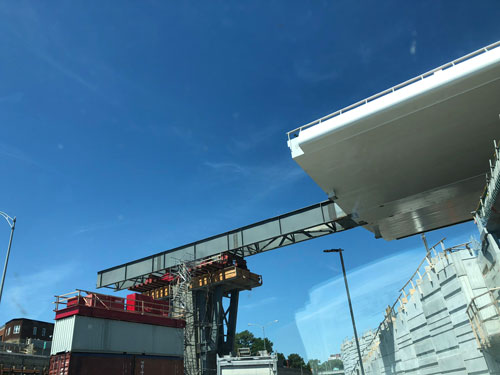 From the outset, steel was the material of choice for this project. The launch method for the bridge was a method imposed by the Ministry of Transport, Sustainable Mobility and Transport Electrification (MTMDET) in consideration of the urban milieu and the unique geometry of the bridge required parts with impressive dimensions. Mammoet and Demathieu Bard–Aecon created an innovative approach which adapted their existing method of skidding to fulfil MTMDET’s requirements for the installation method. https://youtu.be/a7UC1u4ZftE

Steel had the unique advantage of allowing complex geometries to be fabricated, while maintaining the necessary lightness to facilitate the transportation of the parts to the site. Steel enabled the assembly of the deck on the approaches, in a space of limited dimensions and made it possible to obtain a predictable behavior allowing precise calculation of the cable-stays. 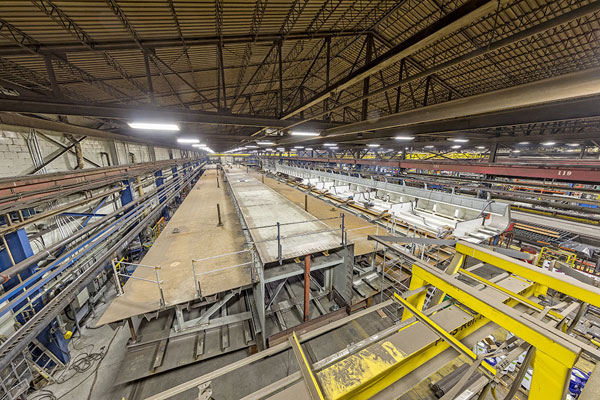 The steel deck is composed of a central box 3.2 m high by 3 m wide to which are attached “wings” with variable inertia supporting the traffic lanes.

The wings are supported from the inside by a series of metal trusses oriented perpendicular to the axis of the bridge and which are spaced every 4550 mm. The top of the wings is made up of orthotropic plates supporting the tracks and sidewalks. The structure includes 2,100 tons of steel components, 8 support devices, 2 seismic supports and 51 meters of LG-3 type tooth seals.

The bridge pylon has a total height of 55 m and has a variable geometry. At its base, the geometry is that of a rectangle measuring 3.6 m by 3.2 m. Starting from the base towards the top of the pylon, this rectangle becomes an octagon, then a rhombus, then a triangle, finally ending in an arrow configuration. The pylon consists of 3 sections assembled by bolting from the inside using butt joints. From the outside, the public once again has the impression of seeing a unified surface, mainly due to the absence of visible joints. A total of 10 non-symmetrical stay cables support the deck (5 stay cables per span). 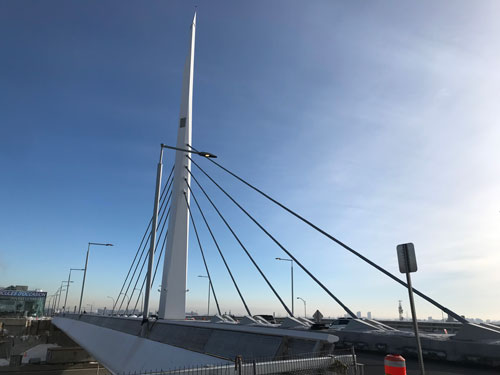 Orthotropic steel decks have become a favorite in Canada, but apart from the economic advantages, the benefits are extensive, such as:

An Orthotropic steel deck is composed of a steel plate that’s covered by a shop-installed roadway surface. The bottom of the plate is simply stiffened using components that are sized primarily according to the traffic loads and the number of load cycles produced by the heavy transport vehicles that will travel over the structure during its useful life. Orthotropic steel deck can easily satisfy a designated service life of 75 years or longer.

A major advantage of orthotropic steel deck is its very low deadweight, which represents just 30% of that of conventional concrete deck. The sizing of steel superstructure components allows for a further reduction of up to 10% in the overall weight of these members, thereby decreasing construction costs for foundations and seismic isolation elements.

The use of steel, the uniqueness of the design methods and the ingenuity of the launching method, resulted in the saving of time and cost, which were certainly important decision-making considerations for the team. A shorter construction schedule and the reduced impact on traffic are always valuable assets attainable by using steel. In addition, and in a context of a sustainable development, the orthotropic deck was also an optimal solution for this project.