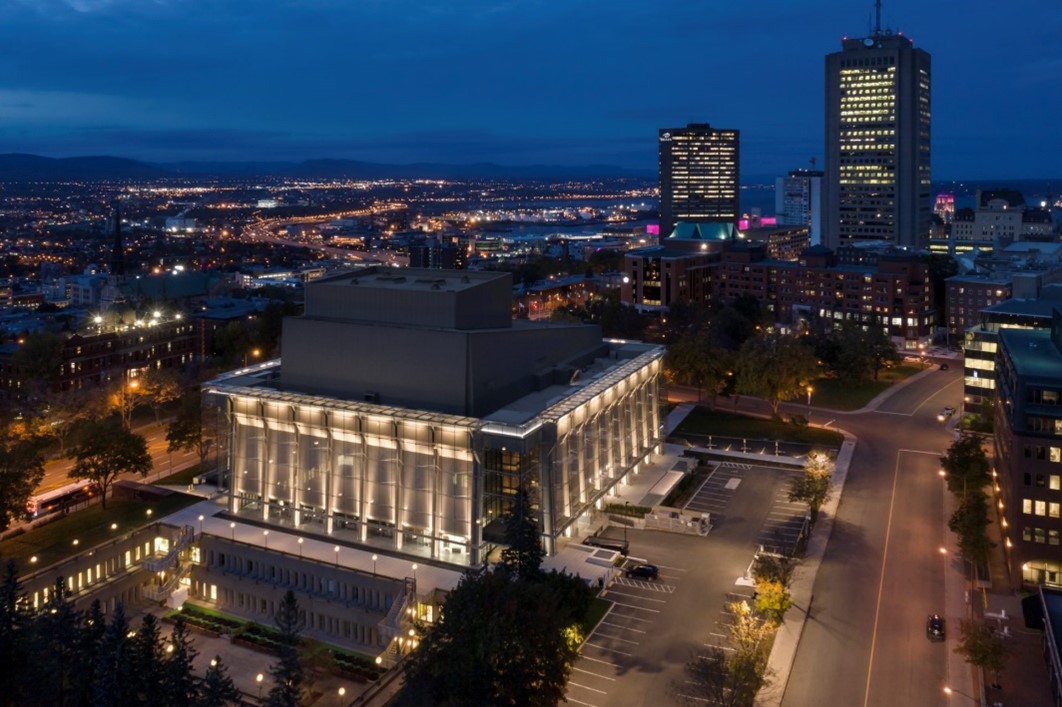 The Grand Théâtre de Québec, inaugurated in 1970, required a major intervention to ensure the sustainability of its exterior envelope.

The project to preserve the building was born from a major reflection on its two identity components, the brutalist architecture of Victor Prus and the monumental work of the sculptor Jordi Bonet. The two important works, which have been eroded over time, have been the subject of a complex and delicate rescue operation. With the desire to transpose these entities into a composition full of finesse, the designers have designed a sober, transparent, minimalist and almost immaterial glass case to preserve them.

This thin glass wall is a delicate and subtle response to a complex problem. Beyond its primary function, the glass case acts as an extension of the original building it comes to protect, in keeping with prus’ artfully crafted structural logic and composition. This setting develops according to the unusual morphology of the Grand Theatre. It is articulated at the corners, it rises at the basilar, it fades to leave the concrete work intact and perfectly visible. 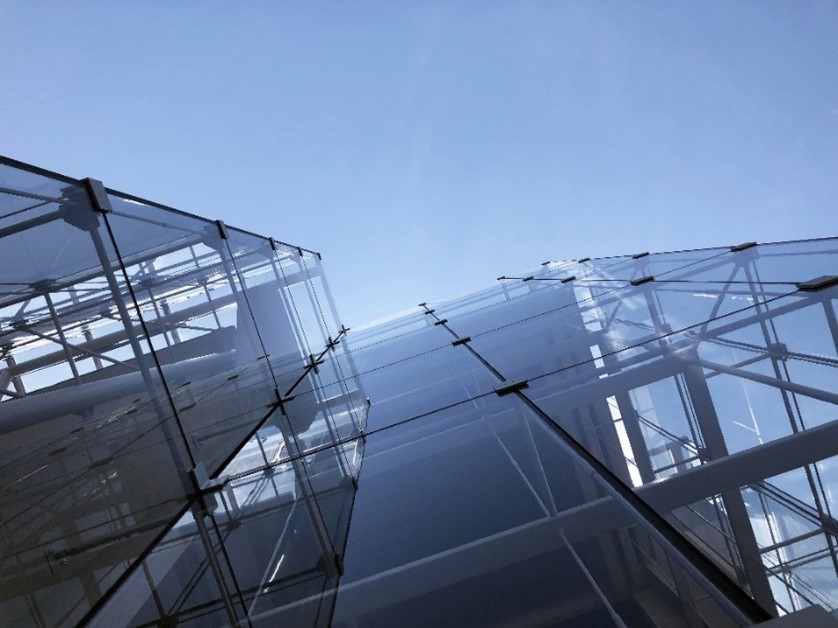 The steel structure on which the glass is based is the result of close and sustained collaboration between architects, engineers, construction specialists and manufacturers. This structure articulates the project in a discreet and sensitive way. The envelope may appear solid or immaterial depending on the light, sometimes blurring the contours of the building. In return, it protects the building from the elements by creating a temperate envelope, while a low-flow heat recovery and thermal mass system provides an energy-efficient and economical solution.

The conservation work carried out by Lemay – Atelier 21 highlights the brutalist forms and artistic narrative of the Grand Théâtre de Québec through a subtle, functional, and ecologically viable concept. Over the decades, moisture has caused the deterioration of the anchors and concrete panels of this institution, the Grand Théâtre de Québec.  When the new envelope was created, the preservation of the heritage building had to be carried out in a context where multiple constraints had to be considered.

The interior mural was to remain intact. As this mural is linked to the exterior concrete panels, any operation had to be without impact and vibration-free to avoid damage. The fragility of the building and the inability to access concrete anchors directly were additional major challenges.

Weather conditions during the installation phases of the structure and glass panels were also a major challenge. The installation of the new envelope required extreme precision and was only possible under specific climatic conditions; the outside temperature should not have been too cold, and the wind should not be too strong. In addition, because the glass was attached to a steel structure, it was not to be exposed to significant temperature variations between the time it was adjusted on the site and when the glass was installed.

The proposed construction systems for the Grand Theatre were custom designed for the project. The delicate steel structure on which the glass case rests is the result of interdisciplinary work between architects, engineers, construction specialists and manufacturers. The size of the elements, the assemblages, the bindings: everything had to be thoroughly considered to meet the structural, climatic and heritage requirements. The envelope has also been the subject of in-depth reflection on its size, composition, and modulation to ensure maximum transparency towards the existing building. 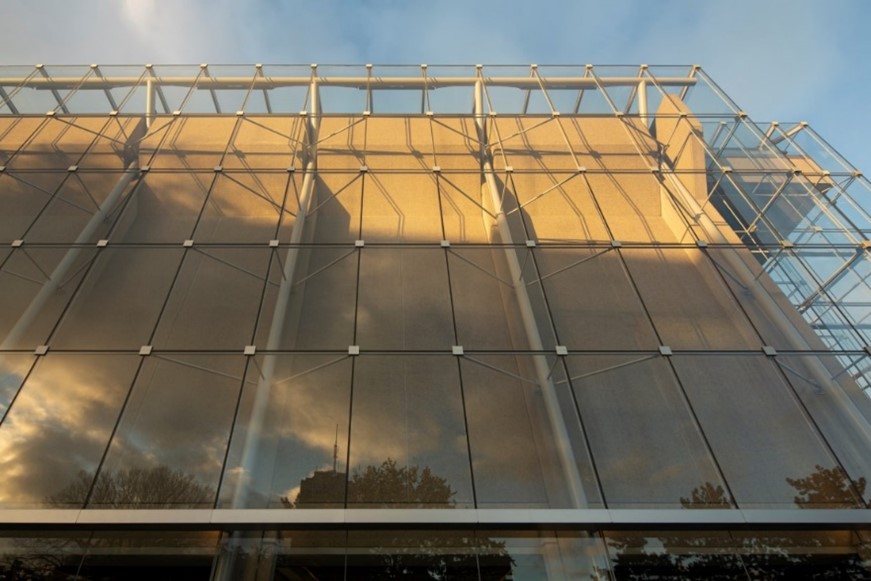 Lemay’s team, supported by specialists from ELEMA and WSP has designed a revolutionary new steel structure while respecting the project budget. Custom prefabricated fasteners have been developed to maintain the discreet and transparent appearance of the new protective layer and minimize the visual impact of the steel and aluminum plates that support the glass. The new columns fade to the rhythm of the existing buttresses, and in addition to their structural role, they serve to conceal various electromechanical elements.

Each glass panel is supported by four fasteners, one in each corner, measuring 200 mm × 200 mm. Each of these fasteners is made up of three plates: two outer plates to support the glass panels and an exterior stainless-steel plate connected to the new secondary steel structure; 900 glass panels, each weighing about half a ton, envelop the Grand Theatre.

The steel structure required assembly testing, was adjusted with great precision, to the nearest millimeter, and experts calculated the position of each glass panel and fasteners leading to the development of a silicone seal base. Many of the techniques used to achieve the required level of accuracy were used for the first time in North America.

Huge two-ton sandboxes were suspended from the structure to stretch it and simulate the weight of the heavy transparent panels before they were attached; this allowed the workers to ensure that the structure was in the exact position. Each time a plate was installed, the ballast was taken off to maintain the balance of the entire structure.

The use of steel consoles allowed the panels to be installed about two meters from the existing building. The interstitial space created between the new glass wall and the walls of the original building will ensure a dry, temperature-controlled environment to prevent the deterioration of the envelope over time. 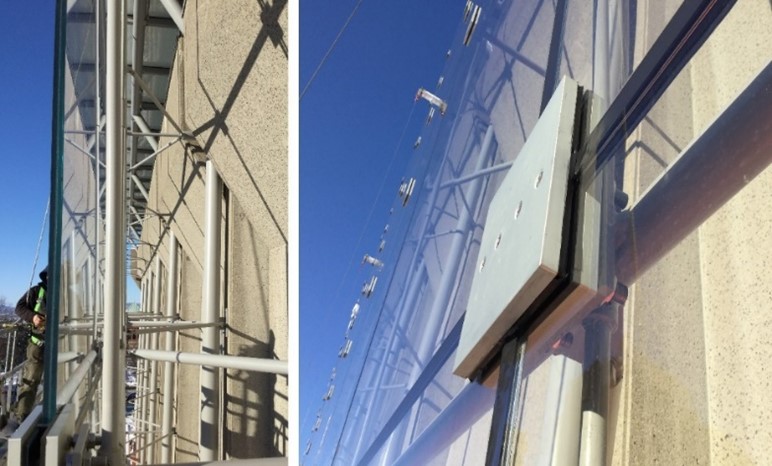 Corrective measures taken by the transdisciplinary team to rectify the many deficiencies and weaknesses in the building envelope include the addition of a transparent and immaterial protective layer composed of glasses supported by a steel structure designed to perfectly fit the unique shape of the Grand Théâtre de Québec. 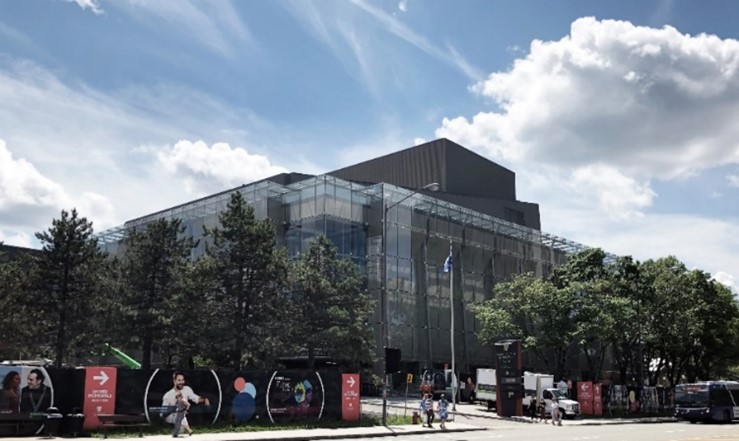