5,600 tons of structural steel, design changes, and inclement weather were no match for the construction company’s expertise

Cavendish Farms’ new $360 million potato processing plant is a huge feat, not just in stature but in its expected impact on the residents of Lethbridge.

In an official press release from the family-owned food company, President Robert K. Irving said, “This significant investment in this community reinforces our commitment to the region and our employees, growers and customers.” The sentiment was echoed by Lethbridge Premier Rachel Notley, who said, “Together with the City of Lethbridge, the federal government and the good folks at Cavendish, we are creating more opportunities for our agricultural workers, more jobs for people in the area, and even more reasons to be proud of an industry central to who we are as Albertans.”

It’s clear that the plant, which was completed in Fall 2019, will be a boon to Cavendish Farms’ production capacity and Lethbridge’s economic outlook.  But the new facility is also a major achievement for Walters Group Inc. 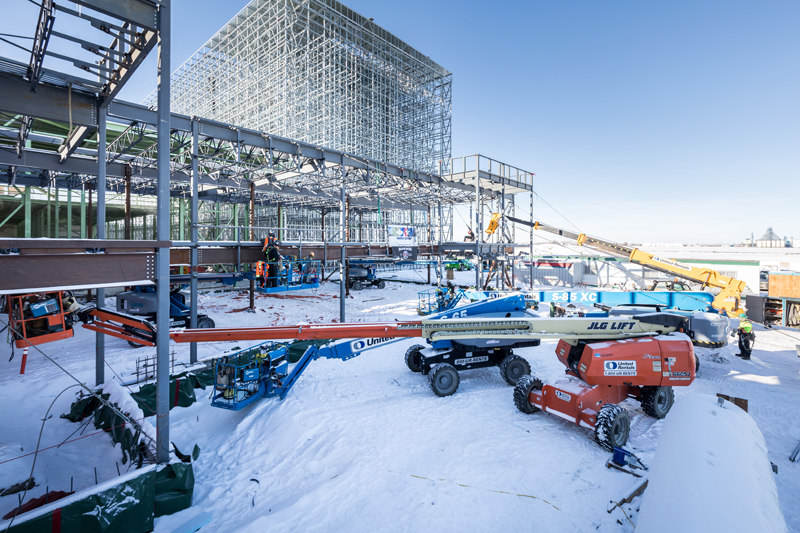 A MASSIVE PLANT ON A FAST TRACK SCHEDULE

Founded in 1956, the family-owned steel construction company has designed, fabricated, and constructed a variety of commercial and industrial projects throughout North America.  Those projects include the Canadian Museum for Human Rights in Winnipeg, the Burgoyne Bridge in St. Catharines, and the Ferrero Processing Plant in Brantford.  Despite having worked on a diverse array of structures in the past, including processing plants, the Cavendish Farms project represented a new challenge.  Aside from its sheer size, there was a very limited amount of time to finish the entire process.

“The challenge was a fast track schedule, so it had to happen really quick,” said Tim Verhey, Jr., Walters’ Senior Project Manager.  The steel scope was completed within 10 months, and Walters had a substantial design-assist role in bringing the structural design to completion.

Finishing any building project in 10 months is an accomplishment, but once you consider the massive efforts and the magnitude of the processing plant, it’s all the more impressive.

Over the course of the entire project, an estimated 900 construction workers were on-site.   5,600 tons of structural steel, trusses, beams, and columns were required, all with shop applied high-performance coatings, and three cranes erected the structural steel simultaneously.

The processing plant played to Walters’ strengths and relied heavily on the company’s vast experience.  About the company’s typical role in construction projects, Verhey, Jr. said, “We’re responsible for the connection design, from member to member.  We fabricate all the structural steel members, ship them to site, and then construct them.”

These skills were especially crucial with the Cavendish Farms project, as Walters provided end-to-end services, including the 3D modelling, 4D scheduling, fabrication, and painting, plus erecting of the structural steel and installation of the 360,000 sq. ft.-metal roof deck.  The project also required collaboration with multiple partners, like Stantec Consulting Ltd. and EllisDon Construction Services Inc.

A PLANT WITH UNIQUE CHALLENGES 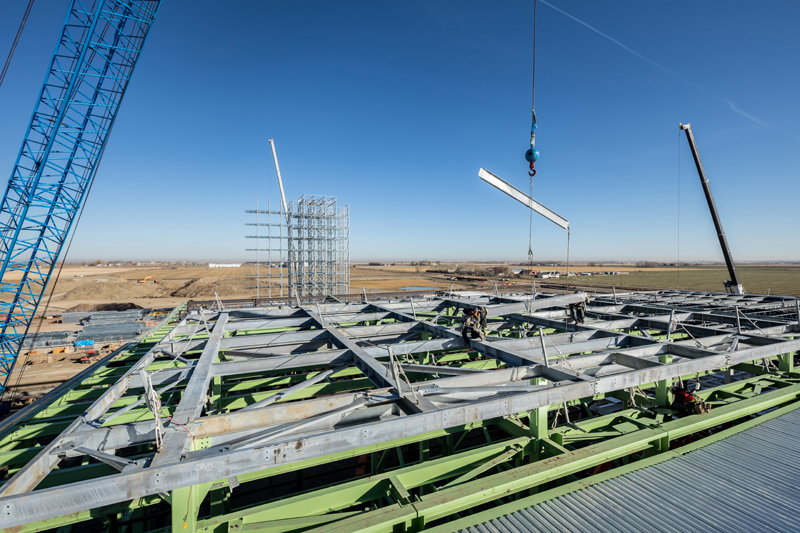 Walters’ expertise truly came in handy when the original design of the processing plant was altered.

“There was a lot of design change, so we had to constantly react to changes,” Verhey, Jr. said. “It’s a real challenge, especially on a fast track job.”  The project timeline was already tight and, despite the updated designs, the team still needed to meet the original deadline.  This required Walters to bring in additional crews to maintain the pace, which created an even more complex job site for Walters and all its project partners.

IronWorkers Site Superintendent Glen Dobbs had to manage both a large number of workers and many pieces of oversized equipment. “Constant design changes in the program made the flow of structural members a difficult endeavour,” he said. “With two shifts of Ironworkers working day and night and 43 pieces of rental equipment in use, the Ironworkers were moving in every direction.”  Dobbs had to maintain the difficult balance between logistics and shipping, and he had to ensure that the raising gangs and second pass crews worked in tandem to execute every change.

Extreme weather conditions added an additional layer of challenges.  But Walters was able to jump every hurdle, a testament to the company’s professionalism and the work ethic and commitment of its partners.

Beyond the intricate innerworkings of the job site, the Cavendish Farms plant had some unique technical aspects, starting with the massive metal roof deck.

“The plant had very high wind load requirements,” Verhey, Jr. said.  This was a specific detail that was especially important for Southern Alberta’s weather patterns. “It required a lot of extra fastening for the roof deck system.”

The plant also required the use of many different paint systems, largely dependent on the activities that would take place in each area of the building.  “The process area has a very high-quality, expensive, multi-coat paint system,” Verhey, Jr. said, as is required to meet food processing standards.  Other areas of the plant used lower grade paint systems.

Walters Group successfully juggled the plant’s specific needs and unanticipated demands to complete the project, an accomplishment that certainly stands out in the company’s already notable portfolio but will also leave an indelible imprint in Lethbridge. 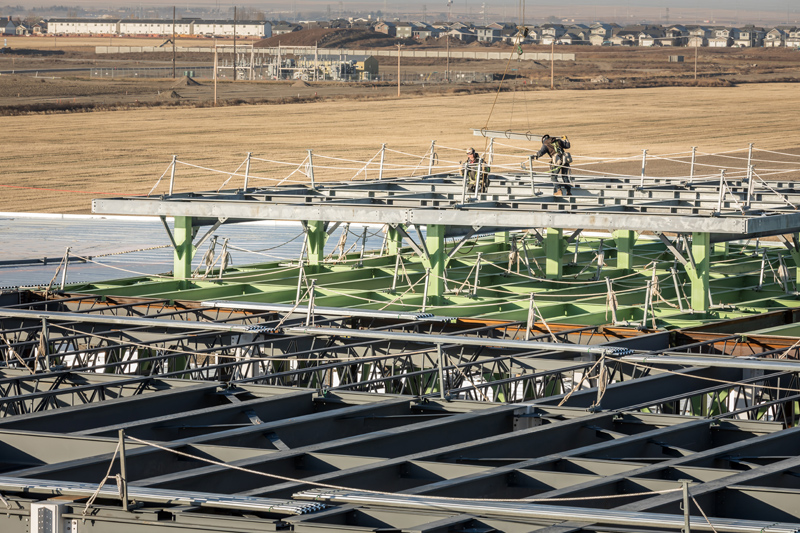 A PROJECT WITH IMPACT

The completion of the processing plant enables Cavendish Farms to nearly triple its annual production capacity.  The company expects to grow upwards of 15,000 acres of potatoes, up from 6,000 acres.  And CBC reports that the plant will create 400 jobs in Southern Alberta.

The Cavendish Farms project also served as a way for Walters to continue supporting IronWorkers Local 725, Southern Alberta’s chapter of local ironworkers, rodbusters and welders.  Walters and IronWorkers have maintained a partnership across Canada since the 1970s.  Walters’ projects create large-scale opportunities for IronWorkers members, and their exceptional work enables Walters to deliver projects of an unmatched quality.  The Cavendish Farms project alone employed 54 Ironworkers who tallied 51,521 manhours.

So, on one hand, Cavendish Farms’ potato processing plant was a way for Walters Group to continuing show its unrivalled expertise and deliver a challenging yet vital project.  But even greater are the benefits that will be felt in Lethbridge for years to come.  This plant demonstrates the wide-ranging power and importance of these projects for everyone involved – the builders, the owner, the workers, and the community.