Upper Fort Garry was the first major building construction on the prairies and the anchor of the thriving commerce of western Canada. The Fort stood for sixty years, when it was almost demolished (the original gateway is still standing).

The Friends of Upper Fort Garry began the development of a major Heritage Park on the grounds of the original Fort.  The grounds of the Fort are now a beautifully developed public landscape in downtown Winnipeg. The West boundary of the park is a sculptural steel wall that shows the exact location and scale of the West wall of the Fort. The Wall is the first phase of a 40,000 square foot interpretive center and museum. 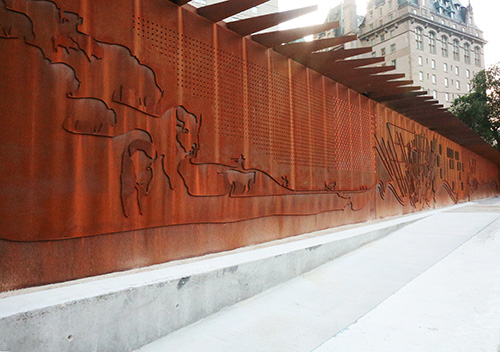 The Upper Fort Garry Heritage Wall is a 400 foot long, 13-foot-high sculpture of weathering steel, sound and light that illustrates over 340 years of history. The steel surface is multi-faceted with four layers of half-inch thick over-lapping steel plate: Stepping closer one discovers surprising illustrations along the length of the wall as the edges of the over-lapping steel layers create patterns and a storyline describing a continuum of regional history: starting with pre-European contact; explaining Manitoba’s significance as a gateway to the expansion of the west, a center of trade and commerce; showcasing nineteenth century Manitoba as a center for the development of Canadian governance and human rights

The Wall has another dimension as well – that of light and sound: The 400-foot-long wall is also a 400-foot low-density LED powered optical screen connected to high capacity video graphic software and full range sound. The cinematic messages are visible from hundreds of feet. The stories which will be told will not only reflect the history of Canada; the entire community will be welcomed to produce individual histories, stories, and thought-provoking richness to the shared urban experience.

The creation of the $4M wall has been a true sharing experience – reminiscent of the medieval cooperation between patrons, artisans, artists, craftsmen, story tellers, historians, builders – and the master builder who kept it all on track, but who was able to open the doors to a whole family of creative energies and abilities.

The entire team has benefited from a wonderful working relationship with one of the only steel fabricators in Canada, Capitol Steel of Winnipeg, who was capable of this complex and sophisticated marriage of heavy steel construction, artistic interpretation, and jewel-like precision.