The CISC Handbook contains a number of tables for Eccentric Loads on Bolt Groups in Part 3. The tables (3-14 to 20) include groups with one to four columns of bolts, with a vertical load applied at an eccentricity e = L with respect to the group centroid. The tables may be used with both ASTM F3125 grade A325 and A490 bolts, in both bearing and slip-critical connections.

A question has arisen recently as to whether the tables can be used in bearing-type connections with slotted holes (with the slots perpendicular to the load direction).

To answer the question, let’s begin by noting that, according to CSA S16-14 Clause 22.3.5.2, short and long-slotted holes may only be used in bearing-type connections if the slot axis is perpendicular to the direction of loading.

Consider a bolt group with a vertical load applied eccentrically with respect to the group centroid as shown in Figure 1. Next, let’s assume that the holes are slotted with their axes oriented horizontally, that is, in the direction normal to the applied force. 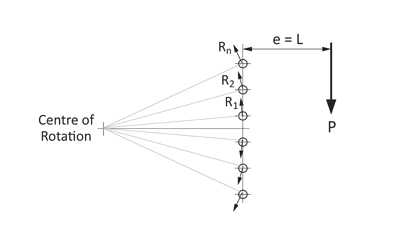 The Handbook tables are based on the “instantaneous centre of rotation method” (Kulak, Fisher and Struik, 1987). In the initial configuration, the angle between the slots and the applied load is 90 degrees. But when the bolt group begins to rotate under load, the angle changes, and the slots and bolt forces (Rn) are no longer perpendicular. The greater the eccentricity, the more the group rotates, and the more the angle changes as we approach the ultimate strength. Moreover, the bolts furthest away from the group centroid will have the smallest angle between slots and forces.

For these reasons, it would not be recommended to use the tables for bearing-type connections with slotted holes.