A Daring Renovation The Historical Building of 425 Viger Montreal, Quebec

This daring project involved the harmonious integration of a contemporary block into the Read Building, a historic building dating back to 1910.

On the first ten levels, the new construction presented itself as an extension of the existing building. This new portion served to extend the height and had to be meticulously installed on the existing heritage building to which is added a new volume of three additional floors delicately deposited on the heritage building thanks to the use of a steel frame.

Steel to the rescue!! Thanks to the use of a steel frame the addition of three additional floors without reinforcing the load-bearing elements was a possibility. The transformation of this century-old building also included the renovation of exterior walls, the improvement of facades, the replacement of doors and windows and the restoration of the main entrance at 425 Viger Street, in Old Montreal. This project was a finalist for the 2019 CISC-ICCA Quebec Awards of Excellence in Steel Construction.

This innovative design had to take into consideration the surrounding character, essentially the architectural essence and alignment of the former printing district and the growing modernity of the international district of Montreal. The concept of redevelopment of the building was based on a contemporary reinterpretation of proportions and the architectural composition in three  critical parts: a Basilica representing approximately one third of the facade, a brief transition segment, a core of the building and a crowning section.

This tripart composition managed to integrate with the existing facades and the movement of the first Chicago School buildings that shaped the neighborhood at the beginning of the 20th century, while the strong segregation of building masses placed the building in the current era. Recalling the original vocation of a building of exceptional heritage value, the facade crumpled like a sheet of paper, creating a multitude of faces reflecting the life of the neighborhood and revealing the heritage jewel that constitutes the Read Building right through. These interstices energized the facade by creating a dialogue with the purer lines of the other components of the building. The envelope of the enlargement drew its inspiration from the properties of the diamond in terms of its angular structure, its transparency, and its luster.

The transparency and elegance of the chosen covering materials provide a marked contrast to the raw character of the masonry of heritage buildings, without, however, distorting them. With the addition of these new contemporary architectural expressions, a new urban form has emerged in the area at created a new fresh balance between heritage and contemporaneity.

“The use of steel was the key element that allowed the realization of the project. To realize this unique architectural concept which completes the development of the original building, steel stood out in several distinct uses which made it possible to exploit the intrinsic properties of the material” 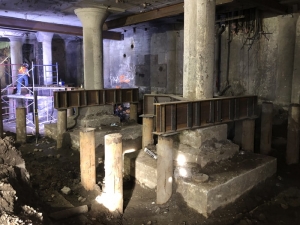 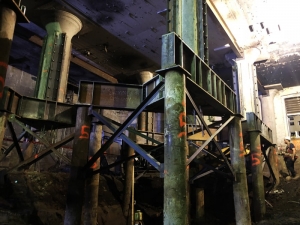 One of the main challenges was the integration of the new concrete cores and the elevator shaft at the foundation level so that the new rafts would be integrated with the existing foundations. To effectively enable the execution of the underground work underground, a temporary steel support system was designed allowing the suspension in the air of 12 existing columns each carrying 10 floors.

The use of a steel frame was the only viable alternative to allow the realization of the underpinning work which made it possible to lower the level of the foundations by a depth of 4 m. Steel tripods were supported on bored piles that were installed to support the concrete columns.

The proposed concept created an addition of 9,884 m² to the existing gross floor area of ​​20,795 m², for a total of 30,679 m². The use of steel resulted to a lighted structure and it allowed the addition of 3 floors to the existing building without additional column reinforcement. The effectiveness of the constructability was just stunning!A breakdown of the original tripart created a feel of spaciousness between the different components of the building, the base, the core, and the crown. The voids created imposed themselves with serenity, making it possible to establish a new marked dialogue between the different parties. The facade resembles a crumpled sheet of paper.

The realization of the “distinctive architectural folds” of the envelope, on levels 3 and 11, was made possible by the integration of a steel frame in the curtain wall. The use of steel combined with some aluminum was therefore vital to allow the volumetric segregation sought by the team of architects. A beautiful display of Art and Form!