This project will clarify some options available for the fabrication of welded rectangular Hollow Structural Section (HSS) K-connections, and their implications for design. The study will focus on truss-type K- and N-connections with a wide range of centre-line eccentricities, branch gaps and overlaps, and with branch members under different loading arrangements, as illustrated in Figure 1. In particular, any requirements for welding (or not welding) the so-called “hidden toe” in overlapped K-connections will be resolved.

At present there is a tendency for HSS connection fabrication to be based on joining members for their cross-section (yield) capacity, with full-strength fillet, PJP, or even CJP, welds being specified along every side of each branch. Justification, however, for welded joints that are instead “fit-for-purpose”, based on weld effective length knowledge, has been progressively developed at the University of Toronto since the 1980s. For rectangular HSS, this began with effective length rules for gapped K-connections, then axially loaded T-, Y- and X-connections, then T-connections under in-plane bending, and then overlapping branches in symmetrically loaded overlapped K-connections. These weld effective length rules for HSS have been adopted by AISC and are best summarized, at present, in section K5 of the Specification AISC 360-16. The effective length method is now being introduced more clearly as a design option for proportioning welds in Clause 13.13 of the forthcoming CSA S16-19. 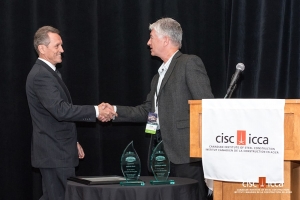 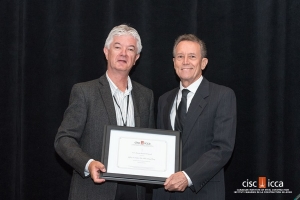 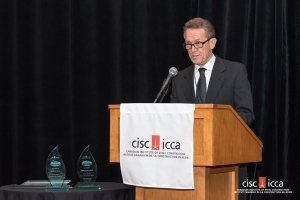 Recent University of Toronto research on weld-critical HSS connections has revealed that fillet welds around the ends of HSS tension members are not capable of developing the “fillet weld directional strength increase” given by the factor (1.00 + 0.50sin1.5θ)Mw in CSA S16 Clause 13.13.2.2.  This is attributed to single-sided fillet welds, under such loading, being subjected to tension at the root of the weld, which is detrimental. This behaviour has been confirmed through both experimental and numerical (finite element) studies, as shown in Figure 2. As a result, the so-called “fillet weld directional strength increase factor” will not be permitted for single-sided fillet welds connected to an element in tension, in CSA S16-19. A similar exclusion of this “sinθ factor” is also being adopted for fillet welds to tension-loaded HSS walls in AISC 360-22.

This current project supported by the CISC Research Committee thus continues a long tradition of practical research on HSS connection design and welding at the University of Toronto.

*This article was originally published in Advantage Steel no. 63 and can be found here.